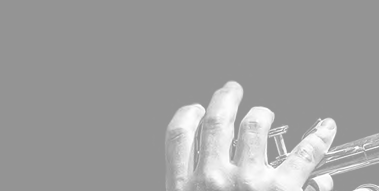 Luca Aquino is one of the most talented Italian trumpet players, known for innovative proposals and for his trumpet sound. Born in the town of Benevento, in Southern Italy, he was mainly self-taught when he began to play the trumpet at the age of nineteen. For two years he abandoned the practice of the instrument to pursue a Master degree in Economics. The love for the sound of Miles Davis and Chet Baker brought him back to the study of trumpet and led him to devote himself completely to music. In 2007 Universal Music published his first album as a leader, “Sopra Le Nuvole”; and a year later he recorded “Lunaria”, with guest Roy Hargrove and Maria Pia De Vito, for which he won the “Top Jazz” award by the Italian magazine Musica Jazz. In 2009, he recorded in the ancient Turkish bath of Skopje (Macedonia) “Amam”, then “TSC “in a church in the Netherlands. In 2010, he recorded “Icaro Solo”, a project for solo trumpet and electronics, in a church in Benevento. After creating the festival Riverberi, he initiated collaborations with musicians and artists; including Mimmo Paladino that led to the registration of “Chiaro”, an album in trio with a Norwegian rhythm section, featuring Lucio Dalla as a special guest. In 2012, after a major live project with Jon Hassell, for the Church of Saint Augustine in Benevento, he joined the quartet of the percussionist Manu Katché and recorded two albums with them. In 2013 along with the accordionist Carmine Ioanna he recorded “aQustico” for Tuk Music and embarked with him on a world tour. 2015 is the year of his seventh album as bandleader: “OverDOORS”, a personal tribute to his favorite band, The Doors.
After having directed the ” Pozzuoli Jazz Festival ” and the ” Bari Jazz ” , on April 7th  2016 he took part in the event ” Manu & Friends ” sharing the stage of the Olympia in Paris with Sting , Richard Bona, Noa, Stephan Eicher, Raul Midon and Tore Brunborg.  2016 is also the year of the production and the commercial launch of the signature trumpet model “Aquino”, which was handcrafted by the Dutch artisan Hub Van Laar based on Luca’s musical touch.
His musical influences are rooted in the early plays of Baker and Davis, for which he was given the nickname of “Apostle of Miles “, but also in the Rock of The Doors, AC/DC in the Jefferson Airplane, Muddy Waters, Little Steven and are reflected in projects ranging between different musical genres, including jazz, hip hop and grunge. He is also known for his musical research on the natural sound, the use of electronics and his passion for musical experimentation in unusual places, for which he is also described as “Innovative sonic explorer”. Similarly, the critics recognize in him that particular Italian distinctive artistic trait that recalls the journey, the creativity and the visionary talent. Places and stories are the core of some of his best projects such as ‘Riverberi’, the festival in Benevento that sees him as the founder and director, which uses the natural acoustics of historical places as a central element of the performance. The world tours go hand in hand with the love for his hometown. His last extraordinary project in 2015 was the recording of an album in the archaeological site of Petra, in Jordan, in collaboration with the Jordanian National Orchestra. “Petra” project saw the involvement of prestigious partners such as UNESCO Amman Office, the Petra Development and Tourism Authority and the Talal Abu-Ghazaleh Organization. An unprecedented initiative, promoted within the global campaign # UNITE4HERITAGE, launched by UNESCO, in defense of the artistic and cultural heritage by the terrorist crimes.

After directing the “Pozzuoli Jazz Festival” and the “Bari Jazz”, on 7 April 2016 he took part in the “Manu & Friends” event by sharing the stage of the Olympia in Paris with Sting, Richard Bona, Noa, Stephan Eicher, Raul Midon and Tore Brunborg [7]. 2017 also sees the creation of the special “Aquino” trumpet model, created together with the Dutch artisan Hub Van Laar. Record the soundtrack of the movie “Fortunata” – winner of the David di Donatello – directed by Sergio Castellitto on a screenplay by Margaret Mazzantini with Jasmine Trinca and Stefano Accorsi. 2017 sees Aquino giving up, due to an accident, his Jazz Bike Tour, which would have included a tour of fifty consecutive concerts, to be tackled by bicycle from Benevento to Oslo. In 2019 his new album “Italian Songbook” was released with the record label ACT MUSIC.

In 2021 he participates, with his music, in the making of the video Oplontis “The coronation of Poppea” directed by Alessandro Alatri, made in the Archaeological Park of Oplontis and realizes his new project “Natura in Musica”, in collaboration with the WWF .